Know your history. Embrace your letters. 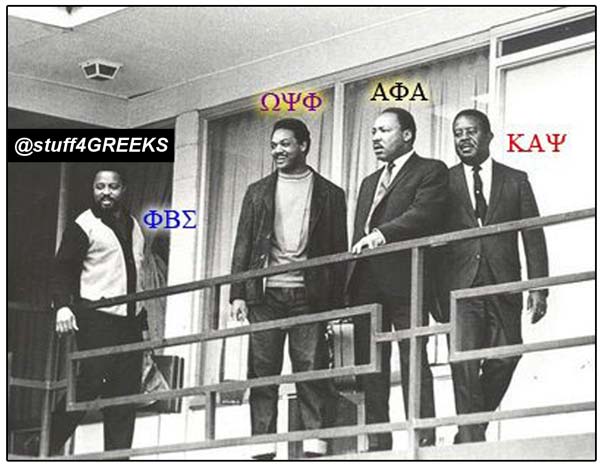 All members of all fraternities and sororities should know and embrace the significance of this photo. It was taken at the Lorraine Hotel in Memphis, Tennessee, the day before Dr. King was assassinated in April 1968.

Greek life is more than just letters, colors, and parties... but often times, the general public does not understand this. The media tends to paint a negative picture of Greeks by focusing on stories of brutal hazing and binge drinking. To combat this negativity, wear your letters with pride and show people through your service that Greeks make a difference and bring about positive change in the world.

Today our nation celebrates the life of Rev. Dr. Martin Luther King, Jr. We must honor and keep his dream alive not just today, but every day.

Note: Several people have asked if they can buy a poster of the above photo. We have historically said "no" to this request, but due to the recent government shutdown, posters are available here for a limited time, and ALL of the profits are donated to The King Center in Atlanta.

Spotlight Story - "On Top of the World" Jacket

Posted by stuff4GREEKS on 1/18/2019 to Current Spotlight Stories
Josefa wanted to gift her daughter, Xi'an, with a jacket that would not only capture her essence, but also what it means to be a true Lady of Alpha Kappa Alpha Sorority, Inc. With her dream and our knack for detailed designs, we were able to put this AKA on top of the world.
Click the "Like" button below to vote for these jackets.
Read more...

Posted by stuff4GREEKS on 1/18/2019 to Current Spotlight Stories
Rebecca made our day when she came in to the store and bought not one, but two jackets! We got even more excited when she showed us her master plan for making two separate designs work as one.
Click the "Like" button below to vote for these jackets.
Read more...

Posted by stuff4GREEKS on 1/18/2019 to Current Spotlight Stories
Alice was purchasing a jacket for her little sister, but had a hard time finding a vendor that would truly bring her vision to life. Luckily she found us, and we were able to turn out one of the most detailed jackets in S4G history.
Click the "Like" button below to vote for these jackets.
Read more...

Posted by stuff4GREEKS on 1/16/2019 to Current Spotlight Stories
Jasmine was named "The alTRUist" because of her giving and nurturing spirit. She came to us with a design in mind that would put her spirit on display.
Click the "Like" button below to vote for these jackets.
Read more...

Posted by stuff4GREEKS on 1/16/2019 to Current Spotlight Stories
Nick Moses is no stranger to our store. He is constantly coming up with unique items and fresh ideas that keep us on our toes. This time, he set his heart on a jacket that would become one of our hottest designs ever.

Posted by stuff4GREEKS on 1/15/2019 to Current Spotlight Stories
As a member of Alpha Kappa Alpha Sorority, Inc. and a social justice warrior, Jazmyne always wants to display her passion for her community. She wanted to take a stand, and recruited us to make a jacket that would help her do so.
Click the "Like" button below to vote for these jackets.
Read more...

Posted by stuff4GREEKS on 1/15/2019 to Current Spotlight Stories
Donna loves her sorority, Zeta Phi Beta Sorority, Inc. As a gift to herself, she wanted to create an abstract design featuring their national symbol, and inspired by her giving heart.
Click the "Like" button below to vote for these jackets.
Read more...

Posted by stuff4GREEKS on 1/15/2019 to Current Spotlight Stories
When the light of the Sun meets the most renowned Egyptian God, you get wearable works of art. Jerome and his line brothers brought us their concept and we made it "monumental".
Click the "Like" button below to vote for these jackets.
Read more...

Posted by stuff4GREEKS on 1/15/2019 to Current Spotlight Stories
For Nicholas Grant, creating a jacket design that represented him and his line brothers was truly an adventure. After months of collaborating, and help from our design team, these "Avengers" were finally ready to assemble. 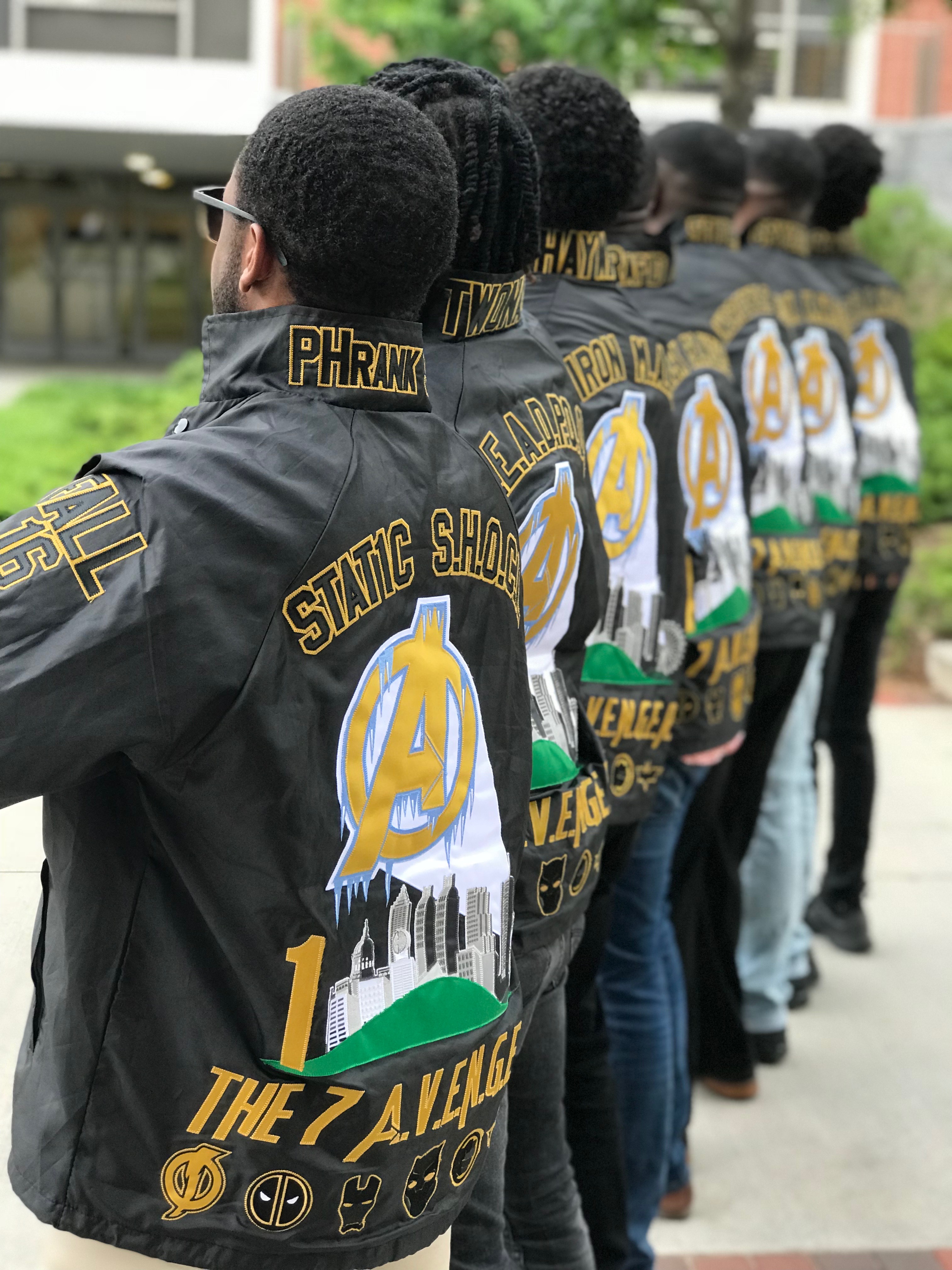 Posted by stuff4GREEKS Customers on 1/8/2019 to Testimonials
We love to see people's faces when they first open their line jacket! Check out some of the reactions caught on video below.

Do you have a video of you or someone unboxing their jacket from stuff4GREEKS? If so, send it to us for a chance to win a $100 Amazon gift card.

Atlanta, GA — Zeus’ Closet, an Atlanta-based store that sells personalized clothing, is among the businesses selected for the 10th anniversary class of the Bulldog 100: Fastest Growing Bulldog Businesses. Hosted by the University of Georgia Alumni Association, the Bulldog 100 is a program that will determine and award the 100 fastest growing businesses that are owned or operated by UGA Alumni, each year.

The store first opened in 2009 as a Greek store for collegiate fraternity/sorority paraphernalia, then quickly expanded to serve embroidery, printing, and promotional products to other markets.

Ethan King, Co-founder & President (UGA ‘99), and Monica Allen, Co-founder & Vice President (UGA ’96), will be presented with the award at a reception on January 26, 2019, at the Hyatt Regency in Atlanta. “It is a tremendous honor to receive this award. There are several top-notch companies represented, and we are thrilled to have once again made the list” says King. “We are thankful for the great education and experiences that we had at the University of Georgia. Those experiences helped shape our lives and our business.”

“The UGA Alumni Association is incredibly proud,” said Frances Beusse, Senior Director of Alumni Outreach. “The Bulldog 100 embody the best of the University of Georgia.”

Out of over 500 companies that were nominated, the committee selected the top 100 based on compounded annual growth rate for the previous three years.

Information about the program, including a complete list of the Bulldog 100 Class of 2019 is available on the UGA Alumni Association website: https://alumni.uga.edu/b100

Zeus’ Closet is a monogramming and custom t-shirt store that makes personalized apparel for corporations, fraternal organizations, film studios, other institutions and individuals. The company has several ecommerce brands, including stuff4GREEKS, FratBrat, and iCatchr, as well as brick-and-mortar retail stores in Atlanta and Kennesaw, Georgia. 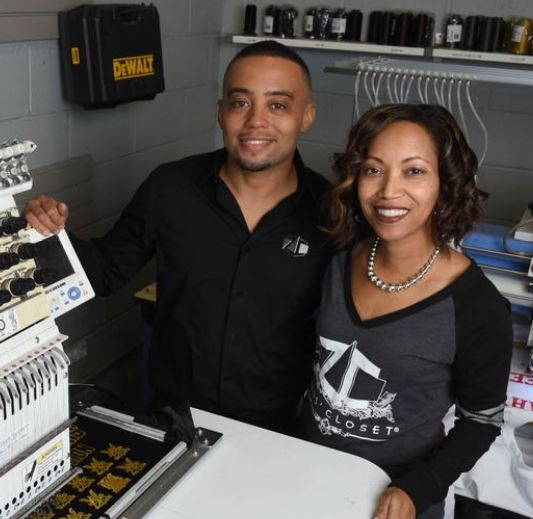 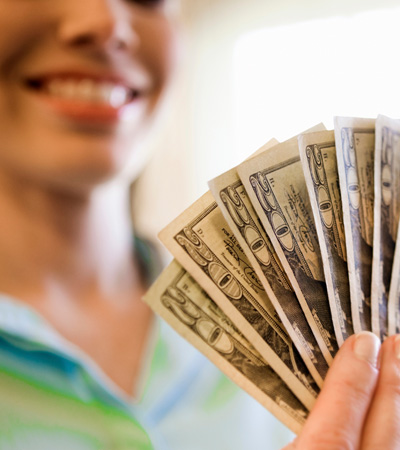 Need to stock up on custom Greek apparel for the new school year? Want to step out on the yard in the Greek jacket of your dreams? Don't have the funds right now? No problem! Just choose the PayPal Credit option at checkout. Learn more...


How do I get my jacket featured as a Spotlight Story?
Just place an order. No other action is required on your part. Each month, we will select one order that we think is the most original and creative concept to date. We will notify you by email if your design is selected.